Summoner 2 is a fantasy Action RPG where you take the role of Maia, a queen and goddess reborn, as you try to save the world from impending doom.
PlayStation 2

The main story follows Maia, Queen of Halassar and goddess reborn, as she tries to learn how to fulfill her prophecy to become the goddess Laharah and heal the Tree of Eleh. She is joined by a number of companions on her quest such as Yago, a character from the original Summoner game, who is searching for his missing daughter Rosalind. She must also combat the forces of the Tempest, a mysterious evil force who is trying to prevent her from fulfilling her destiny. The adventure takes the character all over the kingdom of Halassar and even to a different dimension called "the Twilight Realm".

During the game, the player will acquire a number of allies, though while traveling through the game it is only possible to control a party of three characters. Each time when entering a level the player has to choose a party of three much like Mass Effect. It is only possible directly control one character though it is possible to easily switch which of the three the player is controlling. The majority of combat takes place in real-time and the game is paused when casting a spell, using an ability, or using an item. Summoner 2 uses a single-button combat system, though there are separate buttons for certain special abilities, spell casting, and a block button. There is also a lock-on button which makes focusing on a single character easier, or just swing away at a group of enemies.

The game includes the usual selection of fantasy RPG weapons such as swords, crossbows, hammers, etc. with the exception of a robotic character that has an energy-based ranged attack. All weapons are mapped to the same button, though the ranged weapons have a zoom function which makes sniping at distant characters possible. The weapons are character-specific, and although there are no character classes each character fits a traditional RPG class archetype such as mage, warrior, etc. The mage characters can only equip staff weapons, the warrior heavy swords and axes, and so on. Also, one of the characters uses martial arts and does not equip any weapons.

Every character can use certain magic types or special abilities. There are a number of magic schools such as healing, cold, fire, and so on and they range from direct combat magic to support magic. The spells in each school range from a simple fire arrow to causing a meteor storm and one of the characters even has a spell that encases the enemy in an iron maiden. When casting a spell the game is briefly paused while the player can choose a spell and target, though it is possible to map one spell to the magic/item button to make casting faster. Casting spells and using abilities consumes ability points (AP) which can be replenished by consuming potions.

Maia is the only character that can use summoning magic, just as Joseph was the only one able to summon in the original game and this limitation is story-related. Unlike most games, including the original Summoner, in Summoner 2 instead of the summon being a separate character, Maia actually turns into the chosen summon. This changes her appearance, attributes, spells, etc. to those of the summoned creature. The summon has a time limit and Maia reverts to her original form when the time of the summon runs out or the summon is killed. The time of the summon can be extended by increasing the summon skill and through the use of certain items such as rings which can even totally negate the time limit. There are 4 different summonable creatures each of which has 3 different forms which are uncovered through the story by finding special runes, which permanently upgrade one chosen creature. Once all upgrades are achieved a final 'ultimate' summon is unlocked.

The game includes the usual range of items found in most RPG games such as armor sets, enchanted jewelry, potions, and scrolls as well as a whole range of miscellaneous items such as valuable gems and quest items. 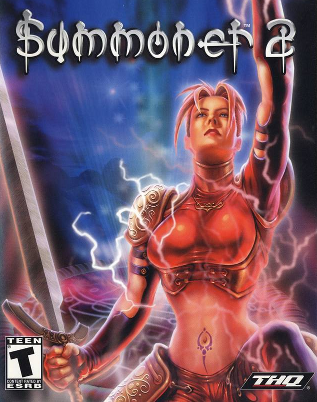