Years after Eldrith the Betrayer vowed revenge on the city of Baldur's Gate, her evil plot to destroy the city begins. Three unknown adventurers, looking for nothing more than fortune and glory, arrive in Baldur's Gate, at which point they are robbed, losing the aforementioned fortune and all items other than their clothes. They will be unwittingly pulled into the conflict and tasked with saving the land.

Baldur's Gate: Dark Alliance is a topdown ARPG similar to games like Diablo in its presentation. Kill monsters, get stuff, level up, repeat.

Baldur's Gate: Dark Alliance was the first game to use the Snowblind engine, which was lauded for its - at the time - amazing water physics. The Snowblind engine itself saw a long lifespan with other fantasy-based dungeon crawlers. Games such as Champions of Norrath and The Bard's Tale were based on it.

Dark Alliance takes place in three major locations: Baldur's Gate, The Sunset Mountains, and The Marsh of Cherlimber. Each of these three areas has a hub where the hero returns after finishing a quest to receive any promised rewards and trade with the local merchants. These hubs are completely safe from attack and can be "recalled to" at any time during a mission by drinking a Recall Potion. Recall Potions act as a two-way teleporter and will allow the protagonist to sell off excess weight at the merchant or stock up on potions and such mid-quest. All missions are given to the hero at this hub by persons in the area and only at the end of an act is the player capable of moving to the next major area, at which point they lose the ability to go back. Societal elements are scant throughout the game, mostly because of the emphasis on beating down bad guys rather than genuine roleplaying.

The character sheet used in Dark Alliance is extremely loosely based on 3rd edition D&D. Just about the only feature left intact are the six primary attributes (strength, dexterity, constitution, intelligence, wisdom, and charisma) that players can boost once every four levels. When a character levels up, they are granted points equal to their level to spend on a wide variety of powers that will aid them in combat from mana-driven special attacks and damage modifiers to increased mana regeneration and armor bonuses. Each of these powers has up to five levels to invest points in though some, such as the Archer's Magic Quiver (which cuts arrow weight by half), have a specific effect with only one level.

The backbone of any hack-and-slash, the inventory menu of Dark Alliance is divided into three distinct compartments of infinite size (weapon size is irrelevant to your ability to hold it). The only relevant factor for carrying capacity is weight. There are no penalties, gradual or otherwise, for encumbrance; you cannot carry more than your carrying capacity, a figure determined by your strength score. Pulling up the inventory pauses the game, allowing to alter your equipment mid-battle if desired.

Player's can equip a bow, one melee weapon, a shield (if they are using a one-handed melee weapon), boots, gloves, a helmet, a suit of armor, an amulet, and two rings. While there are no restrictions on the kind of armor the player can wear, the sorceress cannot use certain two-handed weapons such as great axes and greatswords.

One button is for attacking, one button is for abilities. Nuances in Dark Alliance's combat system are kept to a minimum, keeping the body count as high as possible. Options given to the player for micromanaging fights beyond pressing A until someone dies include blocking, which renders the hero completely invulnerable to non-magical attacks so long as the button is held, and weapon toggling for rapidly switching between ranged and melee weapons. Most of the combat is spent deciding what abilities to use and watching the pre-built combos each weapon has to offer; each group of weapons has a different set of attacking animations that influences when and how frequently a weapon hits. This animation can be accelerated with the Combat Reflexes power.

Potions that restore health and mana can be used any time with the push of a button. However, even though the potions take no time to imbibe, they recharge their designated stat steadily over the course of 3 seconds (an important detail if bad guys are still wailing on a critically wounded player as he or she downs a healing potion). Healing and rejuvenation potions range in power from "lesser" to normal (which has no adjective in-game) to "extra."

Tomes resting on pedestals litter the landscape of Faerun at convenient intervals where players can save their game. Save points serve an important role for raising dead in multiplay. If one hero dies, the survivor (assuming he doesn't decide to just keep going and loot everything without opposition) can resurrect his fallen comrade simply by walking up to the save pedestal. The fallen player will be phased back into existence with all of their possessions and half of their health and mana restored.

For those with friends, Snowblind was kind enough to include a two-player version of the game. The difficulty settings are not altered in any way between single and multiplay, so it is highly recommended that you play on Hard for the purpose of balance. The game plays out exactly the same way with two people externally. The players are independent of each other for the most part; they don't share gold, they don't pool potions or carrying capacity, and they don't benefit from each other's attribute bonuses (such as shopping benefits for having a high Charisma). Friendly fire is off, though there are loopholes in this like the Sorceress's fireball which can damage both her and her partner.

There are three characters to choose from in Baldur's Gate: Dark Alliance. Each comprises one of the basic character classes from Dungeons and Dragons:

While Vahn has unparalleled skill with the bow, he gains even more power from his ability to enchant his arrows with magical effects. He can shoot ice arrows, fire arrows, lighting arrows, as well as a hail of multiple arrows.

What Kromlech lacks in size, he more than makes up with strength. As a fighter, his biggest advantage is in hand-to-hand fighting. He can bull rush his enemies, hit multiple foes with a whirlwind attack, and kill foes outright with a single strike.

Adrianna is as powerful as she is beautiful. Unlike mages, who spend their lives studying magic, the sorceress has a natural talent for magic, and can draw spells on little more than intuition and force of will. She can call down meteors, summon flaming swords, fire acidic arrows, and shoot fireballs at her enemies.

After finishing the game once, a Gauntlet Mode opens where you play as Drizzt, a dual-wielding Drow ranger. With Icingdeath in his right hand and Twinkle in his left, Drizzt is an extremely quick and lethal melee combatant. His abilities focus on crowd control; Repulsion, for example, releases a ring of energy that damages all enemies in a wide circle around him. If you can manage to kill every monster in the Gauntlet before time runs out, both he and the Extreme difficulty setting are unlocked for the main quest.

The soundtrack was composed by Jeremy Soule and received a nomination for Best Music in GameSpot's annual awards. Though an official soundtrack CD was never released, these following tracks could be accessed from the game disc itself: 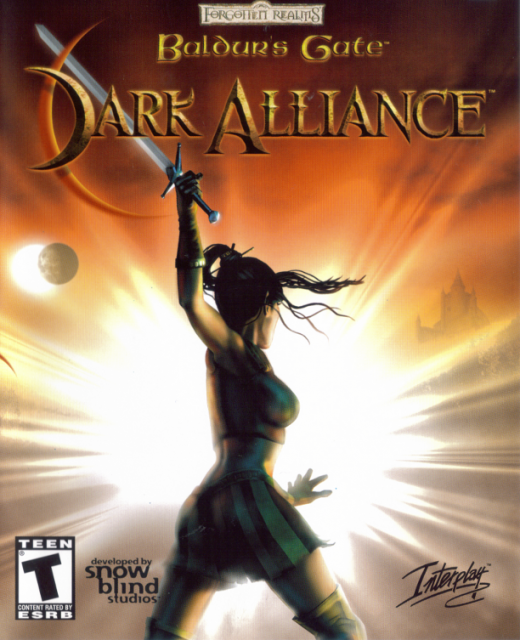