Developed by Ion Storm Austin, and released in 2000 by Eidos Interactive, Deus Ex is a first-person shooter/role-playing game hybrid. In Deus Ex, players take on the role of JC Denton, a nano-augmented agent of UNATCO (the United Nations Anti-Terrorist Coalition). JC is charged with investigating a terrorist group known as the NSF (National Secessionist Force). Though, throughout the course of the story, JC finds himself dropped into a larger ideological war involving the Illuminati, Majestic-12, and other secret organizations. The future path of humanity is at stake and the game culminates with the player making the ultimate determination of mankind's future by choosing one of three possible scenarios.

Deus Ex plays as a hybrid between a shooter and an RPG. As JC Denton, players can make choices that ultimately alter the course of the main story, both in dialogue and through game actions. The RPG/shooter gameplay supports many different play styles; from run-and-gun, to stealth, to subterfuge. For example, a building might be guarded by robots. Players can choose to sneak past the robots as they patrol in circuit, lock-pick a nearby door to bypass the area the robots patrol, or, of course, go in guns blazing. The same set up might even include an opportunity for both stealth and action-based tactics. Again, for example, the player could stealthily hack gun turrets in order to enter a gun fight with added backup.

As in some RPGs, players can kill almost any non-critical character in the game. Some major characters may live or die based entirely on the player's decisions. Both of these major RPG features can lead to unique dialogue options, or change future mission objectives.

Deus Ex uses a grid-based inventory system. The encumbrance of Denton was adjusted for volume of larger items, and density of small items; assault rifles will take a few blocks of space, a rocket launcher will take a few more, but multiple disarmed explosives can stack on the same block.

A large part of Deus Ex revolves around the ability to improve JC's abilities. There are three notable ways to do this: Augmentation Canisters, Upgrade Canisters, and Skill Points.

The player can improve Denton's abilities via bio-mechanical augmentation. This is done by collecting canisters and interacting with a medical bot. Denton's body contains a set number of augmentation slots. Each slot may only hold a single canister—containing 2 pre-determined augmentations—and only one of the augmentations can be activated at a time, forcing the player to decide between the two bonuses.

The augmentation slots are as follows:

At the start of each game, the player is allotted a set number of points to be spent on various skills. By completing mission objectives (including sub-goals or specific game actions) as well as through exploration, the player gains additional skill points to spend later.

Every skill has 4 levels of progression: Untrained, Trained, Advanced, and Master. The trainable skills are as follows:

The player is given 1 head slot, 1 eye slot, 3 torso slots, 1 arm slot, 2 sub-dermal slots, and 1 leg slot in addition to the default augmentations. The player must choose the augmentations they wish to equip in those slots. The available augmentations are listed below:

The music in Deus Ex was composed by Alexander Brandon and consists of jazz, techno, and ambient sounds. These tracks are implemented dynamically, much like the iMUSE system developed by LucasArts. Thus the music changes based on what is happening around the player.

Deus Ex was well received by critics, who praised it for its interesting story and immersive gameplay, as well as the game's cyberpunk setting. The game scored solid to exceptional reviews from some notable gaming outlets, such as an 8.2 from GameSpot, a 9.4 from IGN, a 5/5 from GamePro, and a 88/100 from GameSpy. Overall the game averaged scores of 90 and 91 as tracked by review aggregate sites Metacritic and Game Rankings. It was nominated for over 40 Game of the Year and Best in Class awards by numerous gaming outlets, including IGN, GameSpot, and PC Gamer, and is arguably one of the most influential CRPG/shooter hybrids in gaming history.

Many reviewers repeatedly mentioned a few negative aspects, such as the underwhelming graphics. The voice acting was also criticized, GamePro's Chris Patterson calling it "truly cheesy." 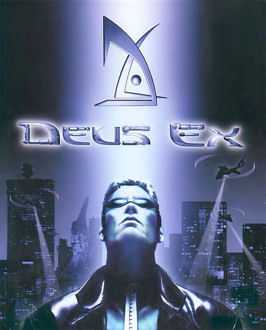