Pokemon Pinball is a pinball game featuring the Pokemon franchise. It combines the "gotta catch 'em all" gameplay of Pokemon with the addictive high-score battles of pinball.

Pokemon Pinball is a pinball game developed by Jupiter and published by Nintendo released for the Game Boy Color in 1999, featuring pinball tables based on Pokemon Red and Blue. The game comes in a special cart that has a battery compartment to power the built-in rumble pack, one of the few Game Boy games to support rumble in any way. The game also supports printing high scores with the Game Boy Printer.

The controls use left on the d-pad and the B button to control the flippers. There is some amount of depth such as tilting the table or altering the balls path. Most of the features on the board are typical pinball staples. There is a multiplier counter, screen in the center, score counter, a ball save light, and a kick-back on the side to throw the ball back when it goes down.

Naturally, having Pokemon in the game means one thing, collection. The game features the full roster of all 150 Pokemon from Pokemon Red/Blue, a 'location switch' button that transports the board to different locations (and, as a result, different Pokemon to catch, with special zones that house rarer and more special Pokemon), and a re-skin, turning bumpers into Shellders and throwbacks into Pikachu, and the ball into an upgradeable Pokeball (for example). The game uses the idea of catching every Pokemon and beating a high score to break itself up into 4 different modes.

As the field multiplier goes up the type of Pokeball will change. The current ball (past Pokeball) can only be kept for up to one minute at which time the ball will drop to the next lower ball.

This is the mode that allows the player to add up multipliers, upgrade their ball (all the way up to a Master Ball, for a field multiplier), open the bonus hole by spelling the word "cave" at the bottom of the table (to get bonuses from free balls, extra scores and infinite throwback), and change location (by hitting the "1 2 3" bumper on the side, such as the Diglett and the Psyduck). Doing a loop left of right over the top of the table builds up both the throwback-meter (good for one free shock back from Pikachu when the ball falls over the side) and the 'catch' or 'evolve' meter. Filling those, and then getting the ball into the correct slot, will start a new mode.

When the right arrows are filled by doing two or three loops through the right side of the table, Catch 'em Mode is started. It starts out with a silhouette at the bottom of the screen, and the player must hit the bumpers at the top of the level to reveal the Pokemon. Once they are revealed, they manifest onto the board and must be hit with the ball four times to catch it. This adds them to the cache, which leaves them for evolution or just to help get to the bonus round.

Evolution mode is unlocked by looping 3 times to the left and then getting it into the correct slot. This is a mode slightly similar to the above mode, only that instead of revealing and beating a Pokemon, it scatters 3 evolution items over the level. All three must be collected within the time limit to evolve the Pokemon, with one marker appearing only after the item before it has been collected. Once all are collected, the player must fall into the slot and the Pokemon will evolve. The evolution item changes by Pokemon.

Each table has its own room that is opened up every time 3 Pokemon are collected (catching counts as a single collection, evolving counts as 2).

Both basically revolve around the same idea- beating the tar out of a plus-sized Pokemon until the player wins and is sent back to the main table. The Red table takes the player to a room where a Meowth scatters money and runs around the room. Money could be collected for bonuses, and the Meowth had to be attacked in order for the level to be won. The blue table takes the player to a room where there is a large Gengar that can such the ball in and spit it out, causing the ball to fall out of the bottom and lose bonuses. Both have been naughty and must be beaten to learn them a lesson. When successfully completed, the next time the player has 3 Pokemon collected a new bonus round, featuring a new Pokemon (eg. Seel, Mewtwo) and a different look and feel, will be available which give the player the opportunity to score more points.

The tables aren't just a simple palette swap of each other. Each holds new obstacles, challenges and designs, as well as different levels in difficulty. The final difference is, of course, what Pokemon are found and what areas the player can go to. While both may have a Mount Moon, for example, some Pokemon may only be on one table, while some Pokemon may only be on the other. The game has the full roster of the original 150 Pokemon, so to catch them all, the player must switch tables and gain proficiency in both, as well as get good at evolving. It's also possible to trade data with another player using the link cable, helping get more that way. 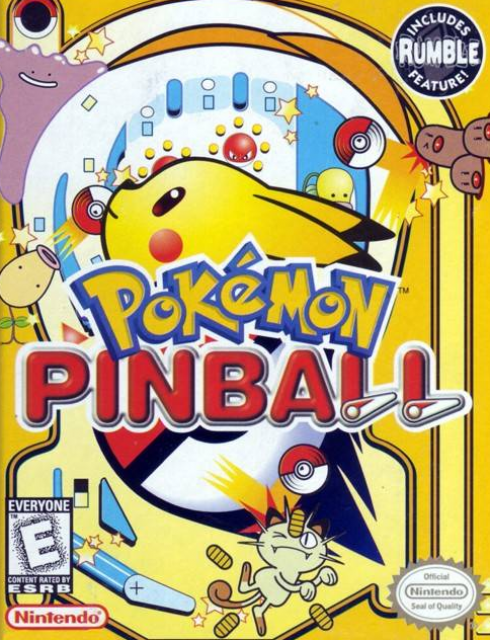