Dungeon Siege is set in the world of Aranna, with the events of the plot taking place in the Kingdom of Ehb. The player starts off as a normal farmer and, when his/her community is attacked by a vicious band of goblin-like creatures called the Krug, the player sets out to fight off the attack and seek help. The player travels to the nearby town of Stonebridge and gains the assistance of the garrison there, but soon finds out that his or her journey does not end at the town.

The player must then embark upon an epic quest in the Kingdom of Ehb to save it from the forces of evil. In Ehb there is a rich variety of areas such as valleys, caves, swamps, icy mountains, and deserts, each rife with a huge variety of enemies to fight. The player will meet many different characters who will join his or her party to help out. Ehb is mainly populated by Humans and Dwarves, though in later games it is learned that Ehb is also home to Elves, Giants and a wide variety of other races.

Dungeon Siege has an isometric view and the player clicks on spots in the environment to move their character and attack different enemies, similar to other action role-playing games such as Diablo. Unlike Diablo, however, Dungeon Siege utilizes a large amount of character automation to decrease the workload on the player. The player can form a party of up to eight characters which can include pack mules to carry loot, and control each party member either manually or automatically, setting parameters for automated behavior. Characters level up their skills based upon how they play, as opposed to simply gaining generic XP from defeating enemies. For instance, characters that use heavy weapons will level up strength, while characters that use spells will level up their intelligence. The game was developed with a display engine that makes traveling the Kingdom of Ehb seamless, with no loading screens between levels.

The game supports multiplayer via LAN connections and the Internet. In multi-player mode you enter a different world than in single player mode.

Gas Powered Games released a toolkit to be used to create mods or "Siegelets." Modding Dungeon Siege became very popular with the game's community, who produced a large variety of mods and Siegelets over the course of Dungeon Siege's popularity.

Dungeon Siege was originally rated Mature due to high levels of violence, though Microsoft toned down the violence in later releases in order to achieve a rating of Teen. The violence was also removed from older copies in a patch. The game includes an option to not display gore, or to change the blood's color to green.

The 2008 movie "In The Name Of The King: A Dungeon Siege Tale" was based loosely on the plot of Dungeon Siege. The Uwe Boll directed movie was universally panned, and with a 4% freshness rating on rottentomatoes.com it ranks among the lowest rated movies in cinematic history.

This game runs on Windows 7 32/64bits. After installing, you need to run the DSVideoConfig.exe file in the installation map and set the values to the correct ones.

After this, you need to check both DungeonSiege.ini files to check if the correct values were set. In these files you can also change the resolution of the game. Widescreen is fully supported. 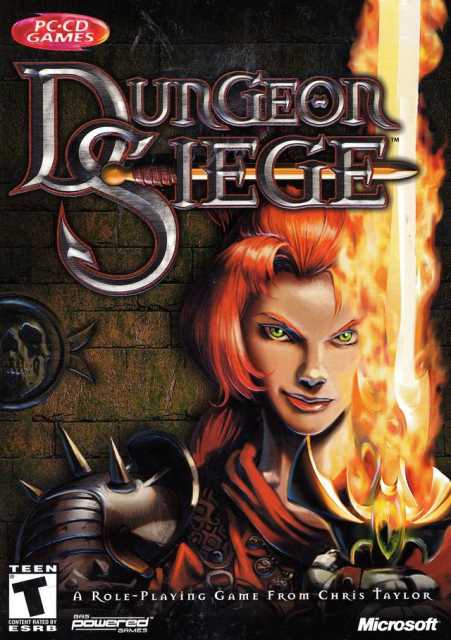