Trinity: Souls of Zill O'll is the next iteration in the Zill O'll series from KOEI as an RPG for PlayStation 3. It was first announced in an issue of Famitsu game under the Japanese name of Trinity: Zill O'll Zero. The PlayStation 3 game is darker and more mature than the previous games in the series. Jun Suemi is taking the position as character designer, having worked on the character designs for the previous games in the Zill O'll series.

A North American release was announced during the release of KOEI's E3 2009 line-up making it the first time this series has come to the west. In December 2010, Tecmo Koei finally announced the game's official release date as February 8th 2011 in the US and February 11th in Europe.

As the game begins, you'll take control of Areus, son of a a human prince and elf woman. After some cutscenes, you learn that you are destined to kill the current evil emperor who is your grandfather. When you were just a child, the emperor found out about this prophecy and killed your father (his son) trying to get to you. You know that your goal is to confront the emperor, but in your current state you are far too weak. After meeting some companions, you travel into the world performing quests for the Adventurer's Guild, all the while gaining experience and preparing for the ultimate showdown that is fated to take place in the future.

Three characters are allowed in your party during battle. You'll be able you to switch between them freely during the battle. Each character has a specialty and these specialties can be used to chain multiple hits together or perform large scale magic based attacks. The spell sword, Areus, uses his blade and his magic to battle the enemies in the world. Dagda, the hulking barbarian type, uses his fists and great defense to protect his group. Selene on the other hand, is a aerial fighter who knocks enemies into the air and uses her dexterity to cut them to pieces.

The game also has an RPG element to it that allows you to upgrade skills as you gain points in battle. You can upgrade all manner of skills including basic attacks and spells to a total level of 3 (with the first level given at start). You can also equip armor and weapons that have rarity stats as well as increases to strength, magic, and spirit. 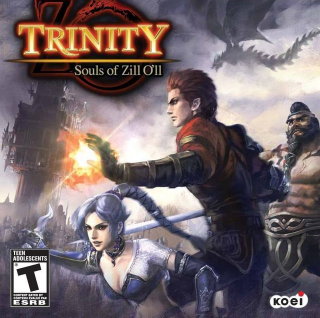