An RPG co-developed by Atlus and Headlock, some other staff include artist Hiroshi Konishi who worked on Radiata Stories and Yoko Shimomura on the music. Stocke must travel through time and revisit key events in order to save his homeland of Alistel from invasion and, ultimately, total desertification. An enhanced port with a new, third storyline was released on Nintendo 3DS in June 2017.
Nintendo DS Nintendo 3DS Nintendo 3DS eShop

Radiant Historia takes place on the continent of Vainqueur, which is divided into five countries. The protagonist, Stocke, hails from the nation of Alistel, which is currently at war with the country of Granorg. Alistel becomes stricken with a crisis when the country starts turning into desert, and people start turning into sand. The leaders of Alistel insist that this is being caused by Granorg, which intensifies the war effort.

At the beginning of the story, Stocke is given a book called the White Chronicle, and is paired with two soldiers, Raynie and Marco. Their mission is to find secret agent who has been trapped in Granorg territory. They succeed in finding the agent, but then become surrounded by enemy forces and the agent is killed. After succumbing to a deep wound, Stocke wakes up in an another dimension called Historia which seems to twist time and space. Stocke gains the ability to travel through time and space with Historia as the relay point, which he will use--at the behest of the prophetic twins Teo and Lippti--to create the "True History" for the continent.

Stocke gains the ability to travel back and forth between the past and present, as well as between two timelines. Near the beginning of the game, a key decision splits the main timeline into two, called the "Standard History" and the "Alternate History". Changing the past will sometimes dramatically affect the future in either timeline. As you progress through the game, you will activate time nodes that you will be able to revisit later. These nodes usually put you at key decision points. At these points, the given timeline will split, either pushing the continuation of the timeline or sending you into a poor ending at which point you will be urged to re-assess your decision. By traveling back to the node, you will be able to make a different decision to continue further in the timeline. While it is possible to discover the "true" history on your first play-through, you will still need to explore the other timelines--meaning, bad endings as well as side-quests--to fully complete the game.

At several points, even after making the right choices, you will find your path blocked due to circumstances beyond your control. In these situations, you can usually solve the problem by exploring the other timeline and changing the outcome of certain events. This will change the circumstances in the timeline where the obstacle lies, and allow you to continue.

Radiant Historia features a unique battle system that utilizes a 3x3 combat grid. Strategy will play an important role, as your attacks will have greater impact on enemies in closer grid units, while enemies further away will take less damage. Larger enemies will take up more than 1 grid unit. Players will be able to strike more than one enemy at once as they change position. Players will also be able to force multiple enemies onto one grid unit with special attacks. When this happens, all attacks on that grid unit will hit all enemies there, allowing you finish off groups of enemies quickly.

The top screen displays a list of who will attack next, allowing the player to plan a strategy. When the player's party members take turns consecutively, the player has the opportunity to execute a combination attack as long as the attacks are planned accordingly in conjunction with the grid strategies explained above. Thus, combos can deal greater damage--both to an individual target (the later in the combo a target is hit, the more damage the attack will do) as well as to more enemies at once--allowing players to quickly take out an enemy.

To better serve the combo system, the player also has the option to rearrange the turn order of the characters in battle, in order to set up more combos. The downside to this is that after rearranging the turn order, your characters will be left vulnerable to attack for a few turns, taking more damage than normal. As a result, you must weigh the risks and rewards of switching the turn order.

While battling a gauge builds up known as a mana guage. Abilities for the mana gauge are acquired through events that happen in the story and become unlocked once the player goes into Historia after acquiring the item. The first mana gauage ability received is a move that can completely remove a turn from an enemy. Further abilities include physical attacks on all enemies, a super-powerful physical attack concentrated on a single enemy, defensive buffs, and more. All 3 characters in your fighting party build the gauge individually depending on the attacks and combinations they have landed as well as the amount of hits they have sustained.

The soundtrack was composed by Yoko Shimomura, whose other works are included in such acclaimed or high profile games as Super Mario RPG, Kingdom Hearts entries, Mario & Luigi entries, Parasite Eve, and Xenoblade Chronicles, among others. Shimomura composed the Radiant Historia soundtrack with instruments found in a symphonic orchestra, with more modern instrumentation and themes generally being avoided. 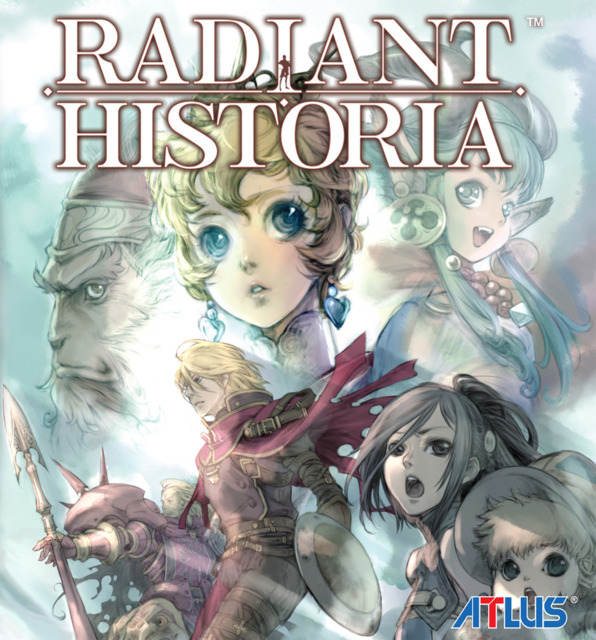