Don't Take It Personally, Babe, It Just Ain't Your Story

A visual novel by Christine Love which tells the story of a high school teacher who is permitted to access the private messages of the school social network and learn his students' secrets.

The protagonist, John Rook, is a twice-divorced middle-aged man in a near future vision of urban Canada. He has taken a position as a high school English teacher in an attempt to rebuild his own life. Over the course of the game, Rook is made privy to the interactions of his students via a tablet distributed to him by the school. At set points, the player is given choices of how to interact with students who come to Rook for advice or other plot-relevant reasons.

The game was built in Ren'Py and displays many hallmarks of the medium. It is played from the fixed first-person perspective, and consists entirely of static character images on static backgrounds. The majority of the game's writing is Rook's internal monologue, broken up by either conversations between students or the reading of messages both public and private on a tablet-like interface. Moments of interactivity are few, comprised of decisions over what tone Rook should assume when responding to a line of questioning (as opposed to what will literally be said; for reference, consider the dialog system of the Mass Effect series).

Set within the broader context of Love's games, don't take it personally occurs between Cell Phone Love Story and Analogue: A Hate Story. These games are only linked by overarching themes, with no continuity of characters. The most obvious nod to previous works within the game is the interface itself, a tablet running Amie software (referential the the Amie operating system in Digital: A Love Story, itself a reference to Amiga computers in the late 1980s).

Digital: A Love Story Clannad The Life of a Pacifist is Often Fraught With Conflict Analogue: A Hate Story Katawa Shoujo Magical Diary 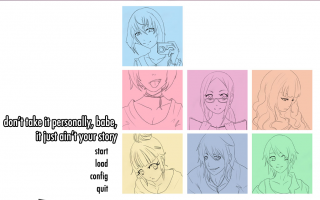