In World of Warships, players fight in multiplayer battles with 20th century vessels from a variety of nations and upon varied nautical locations. The game is free-to-play like its sister titles, World of Tanks and World of Warplanes.

World of Warships is a free-to-play game with elements of naval simulation. It pits teams of up to 12 ships in competitive fleet battles using vessels from a variety of historical navies, in locations ranging from open oceans to island chains and ice floes. Matchmaking between players is randomized, though the game balances for technology which ranges from late 19th century, at the first tier, to the end of World War II at the tenth and final tier.

At its core, World of Warships is about defeating the enemy team via total destruction - typically sinking all their vessels - or territorial control. In order to do so, players use a combination of gunfire, torpedoes, and sometimes aircraft in order to attack opposing vessels in combat. Ships are sorted into four distinct categories; battleships, cruisers, destroyers, and carriers. There are no respawns in any given twenty-minute match, though once sunk players may leave to begin a new battle in a different ship.

Each player has a harbor where they may research new ships, normally by playing existing ones to earn experience points. These points can be used to develop upgrades for warships and eventually reach the next ship in the line. Players themselves also earn experience, which can unlock new account-wide features such as signal flags or ship commanders. Likewise, commanders can also earn experience alongside their ships and develop skills which boost their effectiveness in battle. To actually purchase researched upgrades and ships, there is an in-game credit currency that is earned from success during matches.

As a free to play game, World of Warships has a premium game mode where real money can be exchanged for a period of "premium" time. During this time, they can earn more credits and experience than would normally be awarded for achieving objectives in a match. Additionally there are premium ships, which cost real money and cannot be developed into other vessels but earn more credits and experience for their commanders than usual. "Free" experience, earned as a small bonus for each battle, can be allotted to any ship or upgrade at any time and may also be obtained with real currency via an exchange from regular experience.

When queuing for a match, the player is entered into a matchmaker which takes into account their selected ship's technology level - or "tier" - and sets them up with ships reasonably close in capability. Normally, ships will encounter opponents up to two tiers above or below them in any match. The map and mode is randomly selected. In a battle, areas of the map will be designated as control areas depending on the game mode and victory is achieved by either territory control or by sinking the entire enemy fleet. Draws are possible if a conclusion is not achieved within a match's twenty-minute time limit.

Cruisers are general-purpose warships with a wide variety of capabilities. Normally, they balance decent armor with good speed and later on excel at destroying enemy aircraft. They are natural escorts for the bigger battleships, as their smaller guns are ideal for sinking destroyers and their anti-aircraft armament helps defend slower allies for air attacks. Some cruisers also have torpedoes, or even floatplanes, making them adept in all situations and at all ranges. Cruisers have the ability to concentrate their anti-aircraft fire for a short time, significantly reducing enemy aircraft accuracy.

Destroyers are the fastest and most maneuverable ships in the game. They are also the smallest, having very little armor and thus the most fragile class of warship. Destroyers rely on torpedoes which do tremendous amounts of damage, but typically have shorter ranges than guns. They are also able to use their own cannons to deal with enemy destroyers and harass bigger ships. Destroyers can temporarily boost their engines to travel faster and may lay down smoke screens which hide them for a short time.

Battleships are the largest and most powerful warships in the game in terms of raw numbers. They have the biggest guns and the thickest armor; although they are slow to accelerate and turn, it can tank an entire fleet to quickly take a battleship down. These ships have the longest range and are a major threat to cruisers and rival battleships; destroyers are difficult to hit, while aircraft carriers are usually too far away, though battleships which manage to land hits on these targets will sink them fast. Battleships can repair some of the damage caused by enemy action over a short period of time.

Carriers are the most unique class of ship in World of Warships, and can have a potentially huge effect on the battle in which they participate. They do not attack directly, instead hosting squadrons of fighters, dive bombers, or torpedo bombers to defend allies and attack enemies. These are controlled from a map view in a method not unlike a real-time strategy game. Carriers are a major threat to every other class of ship on the sea, though they often target battleships first due to their large size and slow speed. Aircraft must return to the carrier to rearm and replace lost squadron members, making positioning especially important.

French Navy (France): One premium battleship(Dunkerque) only at this time.

There are two major types of battle in World of Warships: Co-Op Battles are formed from teams of 8 players pitted against a rival team of computer-controlled warships, while the Random Battles place two randomly-assigned teams of up to 12 players against each other. Each of these battles will then be assigned one of three game modes, with a specific mode objective.

Objective: Capture the central control area in the map. This is a single, large region in the middle of the map and both teams will likely meet and fight over it before one side may safely capture it.

Objective: Earn points for your team by capturing and holding regions on the map or sinking enemy ships. When your team loses ships it will also lose points. There are three to five capture areas per domination map, and holding more increases your side's point income. 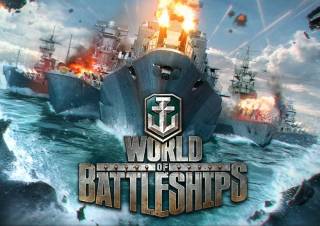