Monster Hunter 4 is the next all-new installment of Capcom's popular Monster Hunter series and was released exclusively for the Nintendo 3DS. It is the second title in the series to appear on a Nintendo handheld after Monster Hunter 3G. The game's primary new feature is the ability to climb onto monsters for even closer fighting.

The game was unveiled at a Nintendo 3DS-focused press event held at Tokyo Big Site just prior to the opening of Tokyo Game Show 2011.

In a special Monster Hunter 4-focused outing of Nintendo Direct, Capcom and Nintendo announced a special collaboration which lets players outfit the two Felyne companions with Mario and Luigi armor available via a special collaboration quest that can be downloaded at 7-11 stores. There is another collaboration quest that yields special armor in the form of Link's green tunic (The Legend of Zelda) as well as a Master Sword and a Hylian Shield and Zelda's bow from Twilight Princess. There's also the iconic boomerang that can be used even while climbing.

In addition, on December 18, 2013, Nintendo president Satoru Iwata announced that Monster Hunter 4 would be the first third party game to receive a puzzle panel in Puzzle Swap.

There have been two new weapons that are confirmed for MH4. One is a hunting rod called "操虫棍", it's essentially a fighting stick with a knife on the tip, it also allows your character to do air flip and jump attacks. The other unique functionality of the weapon is that you can summon a insect and absorb monsters' energy to get various buffs.

The other new weapon is called "Charge Axe", functioned as both an axe and a sword. You character carry a sword in your right hand and a shield in your left hand. You can perform fast combo using the sword mode. It charges up as you chain combos. The sword turns from normal, yellow to red as long as you keep chaining those hits. Red form deals with a lot more damage than yellow and normal form.

You change to Axe mode by forming your sword and shield together. You will have a wider range and deal more damage than in Sword mode. However, you are traded off with a much slower attack animation and speed. The Axe mode also have a chance to stun monsters for a certain period of times. 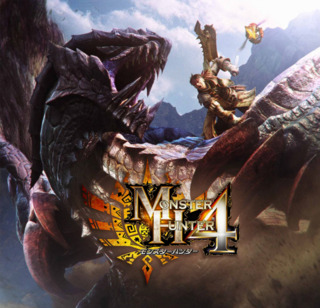