An early Japanese RPG released by Hot-B in 1984 that departed from the fantasy themes of most other early RPGs in favour of what is possibly gaming's first sci-fi cyberpunk plot. Set in a post-apocalyptic city, the game revolves around an amnesiac protagonist with psychic powers.

Psychic City (サイキックシティ), released by Hot-B for the FM-7 and PC-8801 computers in 1984, and was designed by Idemitsu Junichi Oki, Jun Kuriyama, and N. Yoshikawa. It was one of the earliest Japanese role-playing games, alongside the likes of Bokosuka Wars, Nobunaga's Ambition, The Black Onyx, Dragon Slayer, and Hydlide. In contrast to most other early RPGs, however, Psychic City departed from the fantasy and medieval themes common in the genre at the time in favour of what is possibly the first science-fiction cyberpunk plot in a video game.

Around 10,000 years ago, certain humans began to develop psychic powers, eventually evolving into a new race known as the Rapp people. For the most part, they succeeded to hide their identity, living among humans. However, humans have always mistrusted their supernatural abilities and mercilessly killed them whenever they were spotted; such as, for example, during the medieval witch hunts. Finally, the Third World War in the 21st century saw the Rapp people as scapegoats. They were hunted down and forced to hide in the ruins of New York.

The plot is set in the latter half of the 21st century, in a post-apocalyptic ruined city devasted by World War III. Rather than using magic, the player characters instead have psychic abilities (a first for video games). The psychics are being pursued (by guards, soldiers, robots, and biological weapons) due to the city's inhabitants being brainwashed into believing that psychics are a threat to humanity. The protagonist, who suffers from amnesia (another first in the gaming industry), initially participates in combat against Rapp people, but is later saved by them and taught psychic powers, effectively becoming a Rapp himself. From that moment on, he decides to help free the Rapp people and turn against his former employers, with the aim of restoring peace. Later in the game, it is revealed that a supercomputer has been controlling the minds of the city's inhabitants and is intent on capturing psychics.

The player creates the main character by distributing skill points. The skills include Shield, Telepathy, Psychokinesis, and others. Some of them have to be used outside of combat in order to advance in the game.

The protagonist has the ability to telepathically destroy certain blocks or objects, while other characters he later encounters have abilities such as jumping over obstacles, teleportation, walking on any surface without taking damage, and telepathic mind-reading.

The story is presented through cutscenes, but the gameplay uses very simple graphics, with the main character represented as a square on a top-down map. The player navigates the map, sometimes using psychic powers to access new areas, and fighting enemies that occasionally pop up in turn-based fashion. The fights are viewed from a first-person perspective, and the enemies are mostly restricted to robotic and mechanical creatures.

A remake of this game was later released in 1987 for the NES, entitled Hoshi wo Miru Hito, which was developed by a different company, Another, but published by Hot-B. However, this remake suffered from numerous bugs and slowdowns, and, as a result, was poorly received compared to the original PC version of Psychic City. In Japan, the NES remake has a reputation for being a "kusoge" ("crap game"). 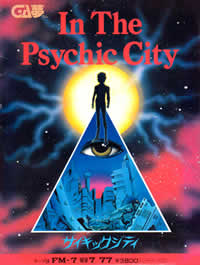