A 1994 side-scrolling shooter game for the Super Famicom published by Visit based on the Appleseed manga/anime.

Appleseed: Prometheus no Shintaku ("Oracle of Prometheus") is a side-scrolling shooter from Kan's and Visit. It is based on the cyberpunk sci-fi manga and anime Appleseed by Masamune Shirow, who worked on it before creating Ghost in the Shell. Two ESWAT members, Deunan Knute (a blonde female human with impeccable marksmanship) and Briareos Hecatonchires (a towering male cyborg with an enormous amount of strength), must protect the fledgling utopian nation of Olympus: one of the last bastions of humanity in a planet ravaged by the apocalyptic World War 3.

The game is a standard side-scrolling shooter. Both characters have a standard handgun side-arm, as well as a special sub-weapon with finite ammo that is different for each. They also have a number of grenades which they can throw at any time. The player must make their way through various missions, getting briefed each time.

The game uses the Greek mythological figure Prometheus in its title, a naming convention it shares with the four editions of the manga. 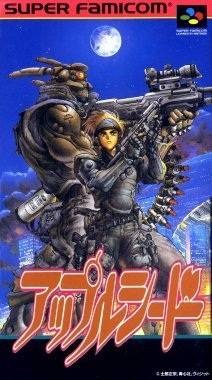