The Matrix: Path of Neo

Play through the events of all three Matrix films as Neo, with an alternate ending written by the Wachowski sisters.
PlayStation 2

The Matrix: Path of Neo lets players take control of the titular hero of the Matrix franchise and play through scenarios directly from or inspired by the Matrix trilogy. Shiny Entertainment's second Matrix game and second collaboration with the Wachowski Sisters (who directed and wrote the movies) Path of Neo was specifically designed to address the major complaint with Enter the Matrix: that it featured side characters rather than let players take control of Neo. What's most surprising about the game, however, was that it was a much sillier, more ridiculous, and funnier game than its predecessor. The final encounter with series antagonist, interrupted by video game facsimiles of the Wachowski Sisters themselves, only serves to reinforce the game's new found drive to not take itself too seriously.

As implied in the title of the game, players take control of Thomas "Neo" Anderson, a wayward hacker disappointed by his job and down on his luck. After receiving an eerie message on his computer monitor one night ("The Matrix has you...."), he led on a series of wild events that lead him to Morpheus. Morpheus reveals to him that the world he knows is actually " The Matrix," a computer program designed by a race of machines to trap humanity. Once freed from the Matrix, Neo learns to bypass the "reality" of The Matrix to give him incredible powers, such as his famous ability to dodge bullets. As Neo, players will experience his early training regimen in a series of Kung Fu inspired scenarios, and watch him become "The One" who can save reality from "The Matrix." Along the way, Neo will gain the power to stop bullets in the air, run on walls, take on multiple enemies at once, fly in the air, and believe....in himself.

Most of the scenes in the game are directly inspired by moments in the movie, but some events have been altered slightly to give players more to do. For instance, early in the original Matrix movie, Neo tries to escape from Agent Smith inside of his office building. Assisted by Morpheus, he manages to avoid the agents, but when the only way to escape his aggressors is to climb out on the roof, he refuses to comply, opting to turn himself in to the Agent. In the game, however, players will guide Neo onto the outside of the building, climb scaffolding, get to the top of the office building, and escape outside by running down fire escape staircases.

Some events in the game have no direct basis in the movie, and instead are there to offer the player more missions to do than to just follow the plot of the movie. In one sequence taking place between The Matrix and The Matrix Reloaded, players will guide Neo through five bonus missions as he attempts to protect possible recruits to the human cause from being terminated by Agents inside The Matrix.

Upon finishing the fight with Agent Smith, the game is interrupted by the Wachowski Sisters in 8-bit form who wrote an alternate ending. They explain why the changed the ending. Chief among the reasons given is that the original ending of The Matrix Revolutions would not work well for ending a video game.

The new ending still places the player fighting as Neo. After finishing off Agent Smith, it cuts the a CG cinematic showing the creation of "Mega Smith." He is made up of all the Agent Smiths in the world and debris from the world. The gameplay involves dodging debris and flying into the Mega Smith to inflict damage.

The Matrix: Path of Neo combines aspects of the beat-'em-up and shooter genres. As in the films, Neo is proficient in both martial arts and gun play, and can switch between them on the fly in combat. Neo has both a quick attack button that can be mashed repeatedly to create a combo, and the length of that combo increases as the player progresses through the game. Neo also has a stun attack button, which, if the enemy doesn't resist the blow, can turn into a powerful grab attack move that deals massive damage. The game's melee combat features no "Lock on Targeting" system; instead, Neo can attack in any direction, throwing kicks at enemies behind him and punches to enemies next to him. When surrounded by two or three enemies, Neo can instigate a "link attack" which deals damage to multiple foes. By timing the use of the stun button at the right moment, Neo can "link" with two or three opponents. Pressing the quick attack button at the right time will do heavy damage to all opponents inside the link attack.

Neo can also pull out a various assortment of pistols, shotguns, sub machine guns, grenade launchers, and assault rifles that, upon equipping them, will him to auto lock onto a target to open fire. Neo is also capable of firing while he rolls and dodges attacks.

Drawing from a "focus" meter at the top of the screen, Neo can slow down time. Upon entering bullet time, Neo's melee attacks become much stronger and strike much faster. Depending on how much focus they have left in the meter, players can combo grab attacks into other grab attacks, defeating all but the toughest bosses in game. Neo also becomes more agile in Focus mode: he can dodge/stop bullets, run on walls, and fly. Focus also makes Neo more accurate, increasing the damage done by his guns. He can also dive in any direction and fire his guns at auto locked targets while in focus mode.

Occasionally, Neo will pick up a melee weapon, such as a sword or a Bo Staff. These weapons increase his melee damage, but will eventually break from extended use.

Most of Path of Neo unfolds in a very linear fashion; players move straight through a level, with almost no derivation from the Path. Only on rare occasions does Path of Neo stop being linear. On these occasions, the player has 4 to 5 missions, and is free to complete the levels in any order they wish.

Path of Neo was released on the PlayStation 2, Xbox, and PC, and all three platforms have some pretty significant technical problems. All three systems, though especially the PS2 and the PC, suffer from terrible frame rates during Chaotic battles, and considering most of the game is chaotic battle, the frame rate is almost constantly less than 20 frames a second. All three versions of the game suffer from flickering textures. The PC port, however, was the worst version of Path of Neo. The more powerful hardware still didn't alleviate the serious frame rate problems and the texture flickering wasn't fixed. The weirdest problem of the PC port, however, was its gamepad control mapping. While many PC games these days have comprehensive gamepad support, the PC version of Path of Neo automatically creates an awkward control scheme for any gamepad other than 10-button Logitech controllers. On an Xbox 360 gamepad, Path of Neo maps camera controls to the triggers, and forces players to hold the start button, B button, and right bumper to dive through the air and fire a weapon. 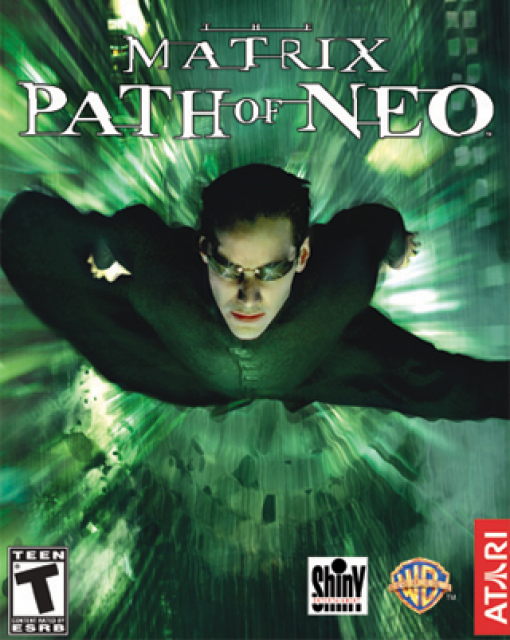