A warrior for the Union named Caim and the dragon Angelus form a pact, bonding their lives together so that they may fight their mutual enemy the Empire.
PlayStation 2

Drakengard is a hack-and-slash action game for the PS2 published by Square Enix and developed by Cavia Inc.  The game was released on March 2, 2004 in the US and Europe, and was originally released under the name Drag-on Dragoon in Japan.  A cell phone version of the game was later released exclusively in Europe.

Drakengard is a bloody tale of revenge and betrayal focused around the protagonist Caim, once a lord of a small kingdom crushed by the Empire.  Filled with hatred, Caim became a soldier in the Union, the largest and most powerful rival of the Empire.  During a battle near his home, Caim becomes enraged and enters the thick of the fighting only to be gravely wounded from behind.  Managing to stagger into the castle courtyard, he comes face to face with a red dragon that has been chained to the ground and also near death.  The two agree to put aside their hostile feelings for each other’s races and form a magical pact, healing their mortal injuries.

However, as is the case with all humans that make such pacts with dragons, monsters, and fairie creatures, Caim is forced to pay a price , which in his case happens to be his voice, and is marked with a pact emblem branded on his tongue.  Their lives now bound together eternally, Caim and the dragon journey to destroy the Empire.

There are five possible endings in Drakengard, each with specific requirements that must be met.  In the first ending, considered the official ending and referenced in Drakengard 2, the dragon sacrifices herself to become the seal to protect the world, and finally reveals to Caim that her name is Angelus, prompting the war-hardened Caim to shed tears for the creature he once considered an enemy.  Alternate endings, however, include one in which the pact between Caim and Angelus is broken as the two fight each other, and the final alternate ending transports the pair to modern-day Tokyo, where they defeat their enemies only to be shot out of the sky by a jet fighter.

The storyline of the original Japanese version of Drakengard includes references to incest and pedophilia that were either lessened or outright removed in the English language version.  Furiae, for example, harbors romantic feelings for Caim, her brother; when a demon forces her to admit this to Caim directly and he looks away in disgust, she kills herself out of shame.  In the English language version, the reasoning for why Furiae commits suicide is much more vague.

Drakengard is a mix of two primary styles of gameplay.  The first is hack-and-slash action reminicent of the Dynasty Warriors series, in which the player controls Caim as he runs around the battlefield, cutting down crowds of enemies with his sword.  The second is aerial combat in which the player controls the dragon in a style similar to the Panzer Dragoon series.  In some stages, the player is limited to only one mode of play, but stages that take place in wide open battlefields allow for switching between ground and arial combat.  While on the ground, the player may also take temporary control of other playable characters with their own fighting styles before being forced to switch back to Caim.

Drakengard 2, a PS2 sequel, was released in the U.S. on February 14, 2006.  Square Enix opted not to publish the game outside of Japan, and so its Western release was picked up by Ubisoft. 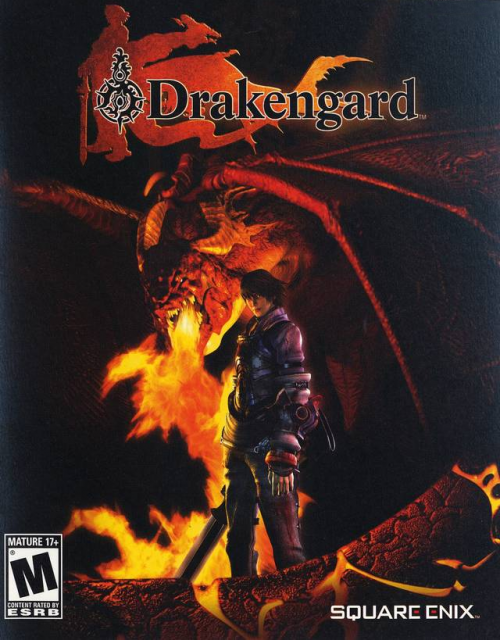